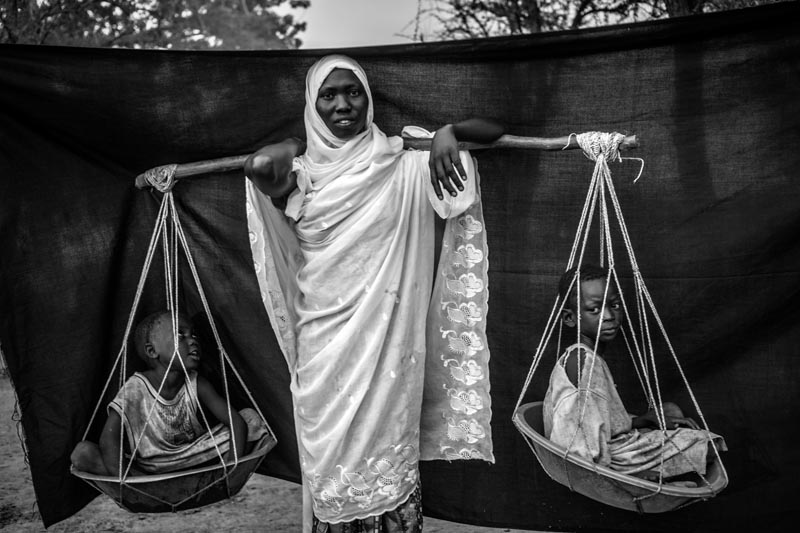 Brian Sokol is a conceptual artist, photographer and author, dedicated to documenting human rights issues and humanitarian crises worldwide. Brian was recently in Sydney and we had the opportunity to talk with him about his extraordinary work and the stories behind some of his images, as well gain some insights into the complexities of working for different organisations.

You have worked for both NGOs and news organisations, what do you see as being the main differences between the two?

In theory, the main difference between the two is that news organisations are primarily in search of current events - the route word of news is new - so unless it’s a breaking event, it probably isn’t going to carry a whole lot of currency with a news organisation. Wherewith a humanitarian organisation, you can have a 25-year situation where refugees have been living in camps and you have the opportunity to speak about it, which is unlikely to get discussed by a news organisation.

When you are working for a news organisation it is meant to be more neutral, whereas you can take more of an advocacy viewpoint from humanitarian communications.

How are images used by the organisations you have worked for, and can this use ever be objective?

Generally, it is more cut and dry how a news organisation will present something. Once you give something over to a humanitarian organisation you have no real way to know what they are going to do with it. These organisations are frequently global – it is like those things where graphic designers from around the world are given one photograph of a woman and told 'make this woman beautiful for your cultural context’ and they photoshop the woman differently. What one country or one wing of an organisation thinks is the best way to use it (another will disagree). There is the potential for it to be used in a way that is more nuanced and compassionate, versus crass, cynical purposes to extract funds. There is a huge range that the photographs can be put out for the market.

What are your top three pointers to survive as a documentary photographer?

Not in any particular order. From a logistical standpoint, don’t put all your eggs in one basket. One mistake I have made is being too reliant on a primary client, if you are unavailable because you have already booked with another client, you may piss them off. Be really mindful of maintaining communication and relationships with your commissioning folks.

Another would be, you have to actually feel something. There are plenty of photographers out there who can come into a situation and have incredible powers of composition and lighting. Personally, if I come into a situation and I don’t really care that much about the story it will come across in the images. Work on things that actually speak to your mind and speak to your heart. If you don’t feel something when you take the picture, then the odds are that no one is going to feel much when they look at the picture.

Third, continue to photograph even when you’re not on assignment, and I can be really guilty and a bit of a hypocrite when I say this. Working on constant projects to keep your eye honed, your mind engaged your heart attuned to stories and subjects. Keep working, keep shooting, keep pushing your craft. It will probably make you a better photographer.

One thing that I have found by reinventing my visual style a bunch of different times – I worked in colour for a year, then black and white, and changing formats from digital to film or to mobile phones. It makes you a more diverse photographer but at the same time, it gives you less of a distinct style. There are plenty of photographers that have done really well by developing a personal aesthetic that they just work on refining and recapturing images, but to me, that can get boring. It might work against me professionally; I developed a style and then I just walked away from it. As you change the style you are able to speak to different things in different ways and different topics more effectively.

Going into areas of conflict and poverty and witnessing trauma, how do you cope with this and decompress after returning home?

I find it really hard, and I haven’t seen nearly as much active combative, direct trauma. I have been in personal danger enough times but not the same as (what others have experienced). I might just be more of a softy than the average person that goes into this kind of thing, which probably influences the work to some extent. I deal with PTSD kind of stuff and I would like to say that working for an organisation (they would offer you support) but in most cases, if you mention it to your editor they will think ‘never hire that person again.’ They want you to cover these things from an incredibly human and sensitive viewpoint but then don’t really give a damn if you come away with emotional damage as a result of it. You are expected to buck up and deal with it and you can’t even really talk about it within the culture of a lot of these organisations let alone expect to receive any sort of support or therapy.

I go out into vast wilderness areas and photograph landscapes. I have a vast reservoir of landscapes from remote areas that no one has ever seen, they are as much therapy as they are photography. And I try and do stuff like yoga, walking long distances, and some kind of physical meditation to try to work through it. It’s a shame, there should be some kind of anonymous support group.

Do you use a DSLR, mirrorless or phone camera?

I use a combination of medium format, 35mm, and film cameras that I will occasionally be able to convince a client to let me use. I used to use phones a huge amount of time when they first came out when they were the brand new thing. Trying to use those to push the technology and see what you could do with this new wave of technology. I am not really married to any particular system. I am kind of all over the map with that, and I don’t know if that’s a good thing or bad thing. If you are just married to one, the thing becomes an extension of you and you can previsualize and spend a lot less time thinking about the tech side of it. But at the same time eventually, I just got sick of seeing everything through the same aspect ratio. I have used all kinds of stuff out there and sometimes the tool fits the bill and sometimes I think why did I bring that.

I am now doing a lot of writing and interviews. I think that has informed the direction of my work to a large extent. It's not just being visual, but also using words as well as images to try to convey ideas. Telling stories and conveying information through multiple different mediums is a powerful set of tools for a documentary, humanitarian and photojournalistic sort of work.

See more of Brian's work and follow him at