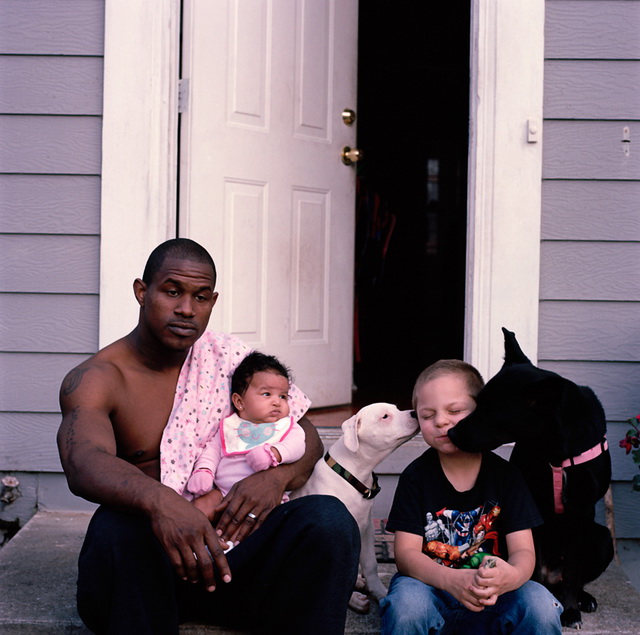 Didi S. Gilson is a native New Yorker, now a permanent resident of New South Wales near Anna Bay. ‘Untitled’ is a finalist in the 2013 Head On Portrait Prize.

I’ll set the scene for you. The late afternoon magic hour was glowing just right. I had two final frames of Portra 160 in the only film magazine that I’d loaded, since I was travelling and leaving again in a couple of days.
Bobby was sitting on the stoop with his new baby, Thearee (3 months old at the time) and his stepson, Justice (5 years of age). The front door was open and the two dogs slowly meandered out. First one to exit is the female part wolf, Dolce, then the new little pup, Armani followed (they’d only had him for a week or so prior to this).
The two guys were often ‘striking poses’, doing some sort of macho or phony upbeat stance, completely uninspiring, and often with an additional cheesy grin. Ugh. The dogs were cool, the baby too – they ignored my big ol’ honking camera and just let me quietly do whatever I do. I took my cue from the canines and had already chided the guys, “Just relax. Forget I’m here. I’ll tell you when I’m done.” I’d done a quick light reading, I knew what aperture I wanted and set my Exposure Value on the Hasselblad​.
Back to the dogs. As they dilly-dallied out, tails a-wagging... I set focus, and composed the square for the edges; with an SLR especially, I like to think about the top and bottom of the frame and even more:  where the sides cut off.
What I include as well as what is left out from the photo, unseen.  The first frame was shot so that everyone would get used to the BIG KERCHUNK that my Hassy makes.  I love it but I’m in synch with this machine. I wanted to gauge what the five creatures in front of me might do ... The guys looked up and I smiled, “Wonderful. Just once more.”
(Okay, I KNEW that frame 11 was not THE photo.)
So I waited patiently for the best, most honest frame. Watching as the humans zoned out a little. Forgetting about me, perhaps. Unbidden, the dogs went into a fabulous Pas de deux - sandwiching the young boy in some doggie affection at the same time. I couldn’t have asked for more. I looked at each of the humans ... their momentary faces, circumstances of eyes, of hands. Their body language… and KERCHUNK.
That’s this photo.