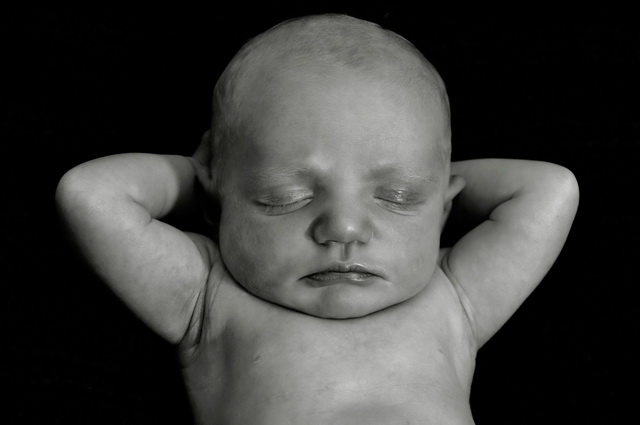 Jodi McConaghy’s ‘Phoebe’ is a finalist in the 2013 Head On Portrait Prize.

As a mum of two primary school aged boys, my working hours are limited. I have decided to pursue a career in newborn photography because I can shoot while my kids are at school and newborns are gorgeous.

The photograph that I entered into the Head On Portrait Prize is of an eleven day old baby called Phoebe. She is the daughter of a friend. The image was taken in a darkened bedroom, while my friend and her mother, who had just flown in from England, watched on excitedly. It was one of my first newborn shoots and I was very nervous. I posed Phoebe in all manner of positions, some better than others.

I laughed at her. I had never seen much merit in the image because it was dark and unusual but she made me promise to do it. Funnily, Jacqui are I are both finalists in the Prize this year.

When I show the photograph to others, they have different reactions. Mainly, they laugh. One of my lecturers cannot stand to look at it. "It freaks me out," she says. The image is not your typical high key baby photograph and the baby is quite androgynous. I ask people if the baby is male or female, they general say "male". Also, the baby looks like it could be deceased, but we cannot quite tell. I have studied post-mortem images from the 19th Century called “Momento Mori”. They intrigue me, because they can be beautiful and emotive, even though they are generally seen as macabre and disturbing to people in the 21 century. I guess that influence has rubbed off on me.

I am 41, I have a BA in Visual Arts from the University of South Australia, Underdale, that I completed in 1993. I majored in Painting, even though I went to Uni to study photography. I have painted on and off for the past 20 years and used photographs as a tool for my work. I love painting, but it doesn’t inspire me anymore. I have been searching for something to be passionate about again for a long time.

One day, my son, bless him, accidently broke my little camera that was always in my bag, and I was lost without it. Weeks later, I was thinking, I really must go and photograph a scene up the road so I can paint it. Then it occurred to me – if I had better camera, I could photograph the scene properly and not worry about painting it.

The penny dropped. I bought an entry level Nikon D90 and enrolled into a certificate IV in Photo Imaging at WSI, TAFE. Two and a half years later, I now have a full frame Nikon D700 and I am about to finished my Diploma in Photo Imaging. I have found my passion.