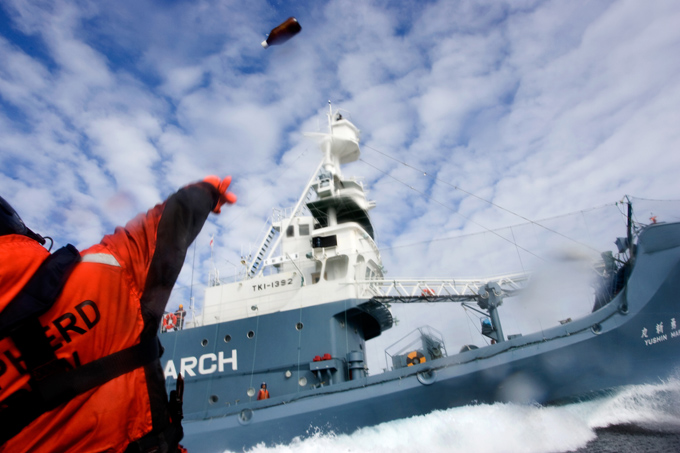 As photographer on board the Bob Barker during the Sea Shepherd’s most successful Antartic Campaign, Glenn Lockitch was rammed by a harpoon ship and trailed by albatrosses. He hid hard drives from the AFP and helped save helped save 528 whales. The series he captured spread around the globe via AAP, Reuters, AFP and Getty Images. On May 17, Whale Wars arrives at Darlinghurst’s TAP Gallery as part of the Head On Photo Festival. Glenn will also speak over the seminar weekend on his extensive work photographing for NGOs including Greenpeace, The Wilderness Society, Old Growth Forest Preservation Society, The Greens and the Aboriginal Tent Embassy. During the panel discussion, Photography With a Cause - Turning NGOs into Clients, Glenn will explain why he chooses to the NGOs he works with and how to get paid doing work you believe in.

You only shoot issues that connect with your my values and conscience. When did that become a conscious decision for you?

I have lived my life that way. When I was starting out in photojournalism I did a couple of shifts at the Sydney Morning Herald to test the waters. I went to photograph a corporate AGM which was against my ethics, so I decided to not continue there. My photography is very personal to me and I didn’t want to support or promote something I didn’t believe in.

What personal risks have you taken as part of your work with NGOs?

The potential of arrest and threat to my life and to my bank balance. But nothing compared to people who have to endure this for their lifetime on a daily basis.

What have been the best rewards?

A clear conscience, being able to use my skill as a photographer to help create social and environmental awareness and change, meeting inspirational people I’ve worked with and photographed along my journeys, educational and spiritual growth, and the experiences of beautiful places I’ve travelled to.

How difficult has it been to stay afloat without relying on commercial clients?

I don’t work for commercial clients so it has been difficult financially. I have had to rely on a second job (for many years driving a Sydney taxi and now I teach photojournalism and photography), as well as pay from NGOs, photo publishing sales, etc.

Can you give a sense of what life and conditions were like on board the Bob Barker?

I spent three months at sea with one break for a couple of hours on land at a French navy/scientific base. It was one of the most intense physical, emotional and spiritual experiences I’ve had, which tested me on many levels, but utterly rewarding. We saved 528 whales.

The ship was 53m long, multi levelled 1950s ex-whaling ship with 23 crew on board and seven Discovery Channel camera crew filming 24 hours a day. We stayed in small cabins in cramped bunks – if I wanted to straighten my dooner whilst sleeping I would have to get out of my bunk as it was too low to sit up in. My cabin was right above the propeller too so there was constant noise.

Temperature: The ship was comparatively warmer inside to the sub zero temperatures outside, but we still had to wear multiple layers of clothing. Outside the ship we would have to wear mustang suits, balaclavas and goggles if we planned to stay out longer than a few minutes. The coldest experiences were when we went out on the zodiacs (speed boats) for up to five hours hiding behind icebergs and chasing the whalers out of sight from the Bob Barker with only a bag of nuts and biscuits and a flask of hot chocolate in case we lost radio contact (which we did).

Water: our water making machine was very temperamental and we ran out of drinking water along the way, so we had to go out on the zodiacs and drag growlers (small icebergs) back to the boat and break them down using picks. We could only shower every three days but sometimes that stretched to ten days. We had to fill our water bucket to flush the toilet from the outside of the ship. We could only wash our clothes every once in a while.

Danger: We encountered heavy storms with waves up to 12-15 metres. We had to endure tonnes of freezing water sprayed on us by the whalers, their LRADs (Long Range Acoustic Device) which were ear piercing sonar dishes that blasted us with a high pitch frequency, we were rammed by a harpoon ship tearing a one metre gash in our hull, we headed out into the deep ocean in zodiacs for hours out of visual from the Bob Barker, we were boarded by the AFP when we got to Hobart and detained for three hours and questioned, etc.

Work: Besides photographing (which was constant), I was rostered to help out with daily chores. I helped prepare sabotage equipment and discussed tactics. I had to help keep watch in shifts on the bridge for icebergs at night when visibility was low and on the monkey deck for the whalers using binoculars.

Camaraderie: We were enclosed in a small space for three months. We had to rely on each other for support in many ways. Self discipline had to be exercised and differences had to be carefully dealt with. Some great friendships with diverse and interesting people were made. On board there was a NASA astro-physicist, engineers, a real estate agent, a primary school teacher, paramedics, a doctor, activists, sailors, a violin shop owner, Discovery Channel film crew, a cook, ex police officer and fireman.

Scenery: The scenery was utterly stunning! I experienced my first ever snow storm in Antarctica. From luminescent blue icebergs, whales, penguins, sailing with dolphins at arm’s reach, giant petrels and albatrosses following our ship for days on end, seeing the Aurora Australis and the sunrise and sunset over the Antarctic.

Was your ship working in close proximity to the Ady Gil? What was it like on the Barker to receive the news that Ady Gil had been sunk?

We were right behind the Ady Gil when it was rammed. Everyone was totally shocked and extremely concerned for the possible loss of life. Our ship rescued the Ady Gil crew from their ship. We tried towing the ship for two days. We had the Ady Gil crew on board our ship for a couple of weeks until they were transferred over to the Steve Irwin to head back to Hobart.

What were some of the biggest photographic challenges about working in that environment?

Having hardy camera equipment was essential. A backup camera was necessary and batteries that could handle extreme temperatures. Large external drives and backups, recyclable batteries were needed. My equipment had to be constantly cleaned to protect it from salt spray. I had to shield my camera from tonnes of water spray from the harpoon ships. I had to be careful to not drop my camera in the ocean especially when on the back of the zodiac travelling at 35 knots zigzagging between growlers and icebergs. Goggles were essential as your eyes water constantly from the cold and I wear contact lenses, so I had to constantly interchange between my camera and my goggles. Having gloves on my hands made it difficult to change my camera settings. I had to work on my laptop in pitching and rolling seas. We had seven Discovery Channel film crew on board who would dominate the angles for filming making it difficult to get in close so we had to come to an arrangement. I had to hide my external drives on board from the AFP who would have confiscated them. Photographing day and night on minimal sleep as I was after a few weeks out to sea the only photographer on board. Working to global media demands and deadlines for photos.