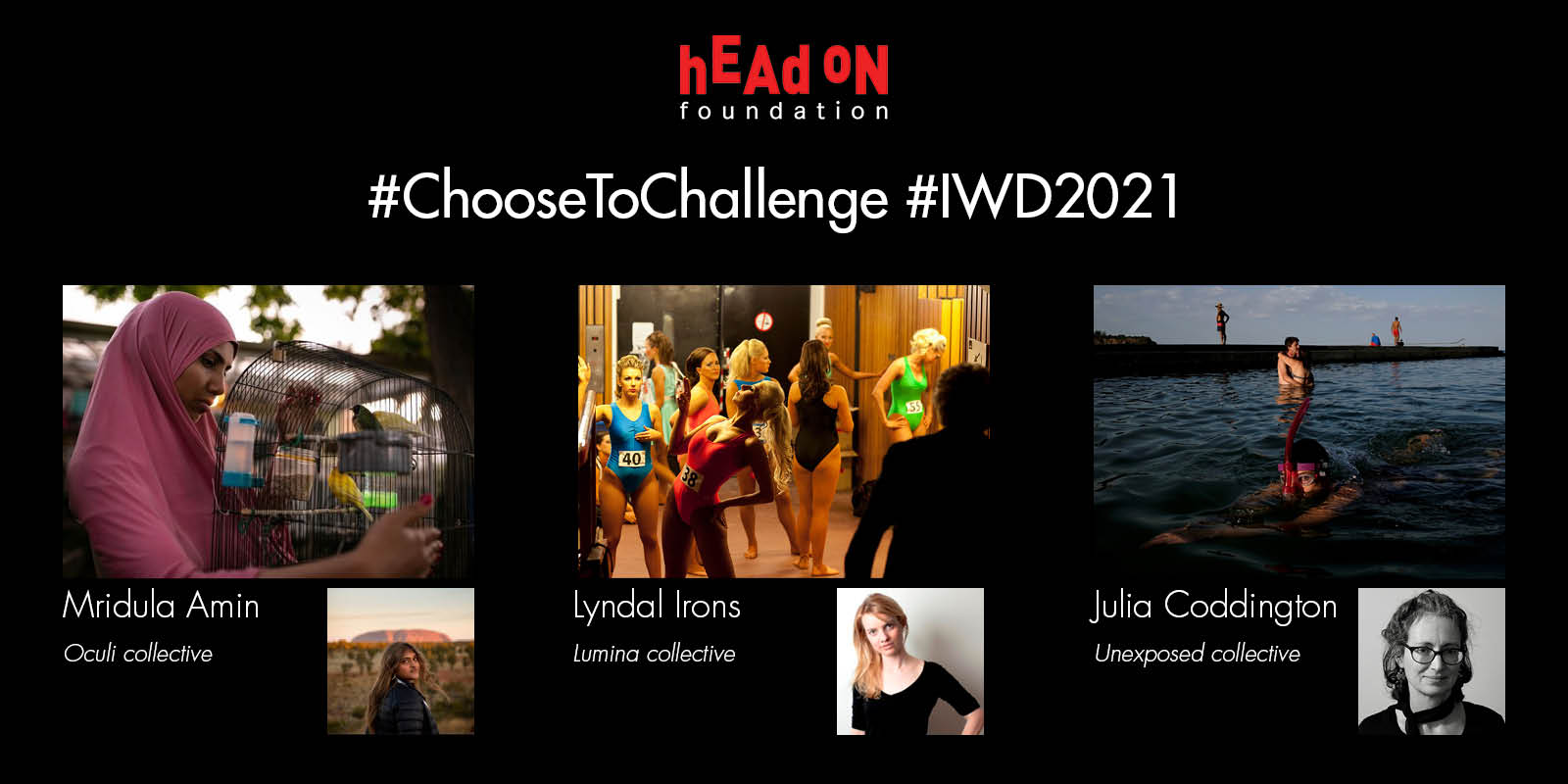 Head On is proudly inclusive and gender-equal.  We are delighted to deliver this Head On Spotlight to show our support for and solidarity with International Women's Day (IWD).  The overarching theme of IWD this year is #ChooseToChallenge - to call out gendered actions and assumptions, to challenge gendered stereotypes whilst promoting a gender-equal mindset and celebrating women's achievements.

All these women have challenged stereotypes and assumptions through their careers and creative practice. We will gain insight into their experience as a woman in the industry, discuss the role of photography collectives and the purpose of all-female collectives and explore their incredible work.

Join us at 6pm Wednesday 3 March for what is sure to be a fascinating conversation.

Head On Spotlight sessions are free for Head On members, become a member today.

Mridula Amin is a Dhaka-born Australian photojournalist and reporter. Her work focuses on themes of migration, identity and social justice in the Asia-Pacific region. In 2020, she became a member of Oculi, one of Australia's leading photography collectives.

She graduated with a Bachelors of Media and Bachelors of Law (BA-Media/L.L.B) from Macquarie University, Sydney in 2018. She was admitted to the Supreme Court of New South Wales as a Lawyer in 2018 and has completed photojournalism projects in Australia, Bangladesh, India, Myanmar, Nauru and the US.

Her work has been featured by The New York Times, National Geographic, The Wall Street Journal, The Guardian, Australian Broadcasting Corporation, Special Broadcasting Service, De Tijd and VICE News. She was finalist in the Head On Photo Awards in 2017. She has shot campaigns for commercial clients including Samsung and Riparide and works as a reporter/photojournalist for the ABC, Australia's public broadcaster.

She is also a member of the Little Box Collective. Her work is focused predominantly on street photography and has been exhibited and published locally and internationally. Julia has been a regular exhibitor in Head On Photo Festival, including the 2020 exhibition Double Trouble: Exposing Women in Street.

Lyndal Irons is a Sydney-based photographer and writer focused on local reportage interested in seeking out parts of Australian society that are familiar, accessible, yet not often closely encountered.

By recording social histories and building legacies using photographs and words, her work encourages curiosity and a deeper connection to daily environment.

Lyndal’s work has been exhibited in solo exhibitions at the State Library of New South Wales, the Australian Centre for Photography, and as part of the Elizabeth Street Gallery (2014), the Sydney Life Photographic Competition (2011, 2012), the National Portrait Prize (2017), the Bowness Prize at the Monash Gallery of Art (2015) and Tweed Regional Gallery for the Olive Cotton Award for Portraiture (2015) and was the recipient of the 2015 Pool Grant. Her works are held in the collection of the State Library of New South Wales. She has exhibited as part of Head On Photo Festival and is a founding member of Lumina Collective.