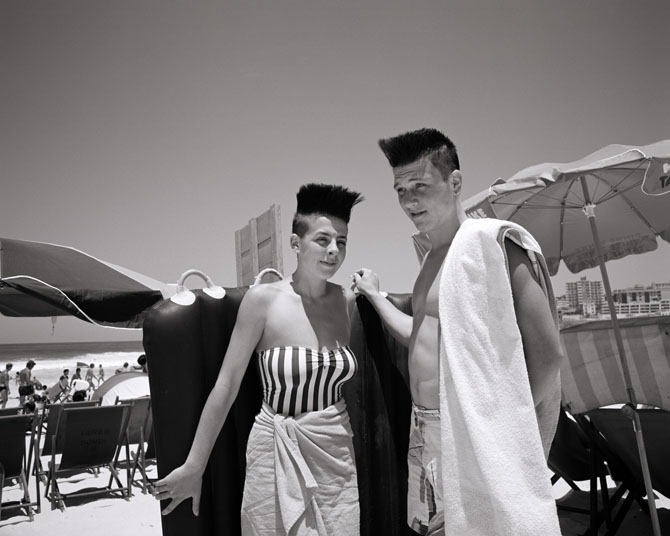 Jon Lewis has exhibited extensively since 1974. He was a member of Sydney's "Yellow House" in the early '70s and was a founder of Greenpeace Australia. During the 2012 Head On Photo Festival Lewis is putting his classic images of Bondi Beach in the 1980s back on display in the place they were made.

"You can almost hear the sound of scratchy rock and roll blending with the squeaking of thonged feet on sand in Jon Lewis' Bondi Photographs ... Equipped with only one camera with wide-angle lens closely matching the human eye's field of vision, Lewis' photographs are, for the most part, artlessly direct portraits of the people either living in or visiting that most Australian of places, Bondi.

“Lewis has, in the five months over which the pictures were taken, created a coherent visual census of Australians at leisure … In one of the strongest images a retired Beach Inspector of Hinzean proportions basks Buddha-like before the camera, shaded from the fierce sun by only an absurdly tiny white hat. With his well rounded form repeated in the curves of an amphitheatre like tent behind him, the man's open smile suggests both subject and photographer knowingly share the drollery ...

“Above all Lewis' photographs celebrate the facts that Bondi for all its tacky charm belongs to the people and that the man next to you in the surf might be either a prince or a pimp.”

“A single glance at the pictures recalls Diane Arbus. Humanity confronted defiantly, head on, centrally placed in the picture and conscious of it all happening.

"It's not ordinary humanity either, but with an odd slant - like the teenager with the punk haircut, the pale pot-bellied Englishman with the Union Jack pants (Rule Britannia in reverse) surrounded by bronze bodies and blazing sunlight ... all joined together in the life charade under the democratic Australian sun ...

"The irony is that a million years from now, this flat and beautiful beach will still be swept by white crested breakers, long after the subjects of the moment have been phased into oblivion ...

"Whereas Arbus' pictures, with their terrible loneliness, beget pity and sympathy, with at times a little revulsion - even contempt - Lewis' characters beget humour, a certain joy of just being; they smile involuntarily because of life, and without emotional havoc.

"Lewis' images do not over illustrate the popular beach concept of the sexy, pretty girl. his bodies embrace all folk-orientated shapes: fat ones, short ones, thick ones, thin ones, wrinkled ones, strong ones, daggy ones, all accompanied by the extra flesh and bone bits which make up the whole.

"His outlook is refreshingly extrovert with a difference. He has a great spiritual affinity for these people and uses his camera with appropriate feeling, not just as an instrument for objective recording."

Jon Lewis during the 2012 Head On Photo Festival: