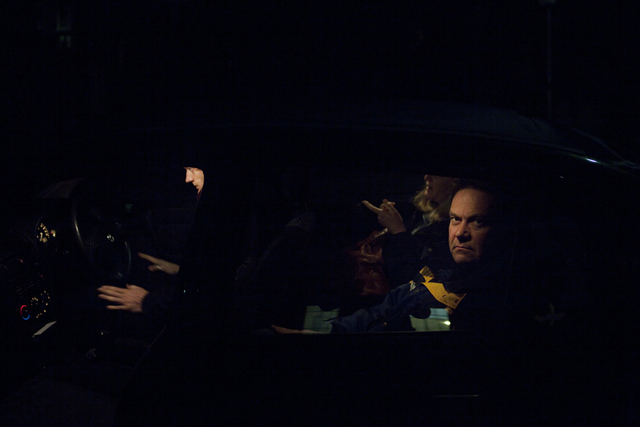 (A SUB-NARRATIVE TO THE SERIES NEAR)

His parents arrive on a Monday. He has taken five weeks off so we can spend it with them. It’s been a year and five months since we last saw them. The big void between Cape Town and Melbourne doesn’t make reunions a regular occurrence. We try to anticipate nothing, to see everything, to take the days as they come. We share stories, laughter - and silence. Not all days are good. Realising our differences, we clash, mostly over silly things like maps or dishes. We road trip through the winterly cold of June. For the most part, distance is a silent traveller on the back seat. It’s hard to filter it out, even on the best of days. It sits there - grinning, invisible, feasting fat on our unspoken expectations.

Soon enough, the time we share will seem a faded dream. Soon enough, 10335 kilometres of blue will divide us.

10335, Blue June is a sub-narrative of Near - an ongoing portrait of my family, investigating what is ultimately the centre stage of my life. Near explores issues such as the complexity of family love, displacement and belonging. Our story is common to the 21st Century - we're spread across four countries, torn apart and thrown together by migration. Together, we've come through cancer and suicide.

The work pays tribute to the idea that in the end, we belong to people, rather than places or things. We belong to the stories we compose, and hold close.

German photographer Katrin Koenning lives and works in Melbourne, Australia. Much of her work investigates the ordinary and everyday. Her images have been shown at international festivals such as FORMAT, Reportage, Voies Off, Gijon International Photojournalism Festival, Delhi Photo Fest (forthcoming) and Noorderlicht. Katrin has exhibited in over 13 countries, and her work has been published in the New York Times (IHT), Der Spiegel Magazine, Marie Claire Magazine, The Guardian, DeepSleep Magazine, Capture Magazine, Eleanor Magazine and Lightjourneys amongst others. She has won a number of awards including the Troika Editions Format Exposure Prize, a Julia Margaret Cameron Award, a National Geographic Award, the APA Award for Best Documentary Photography, and the Godfrey Rivers Medal. In 2011, Katrin was selected as Australia's Top Emerging Documentary Photographer and won the 2011 Head On Portrait Prize Critic's Choice award. She is the Editor of Silent Screams: The Rights of the Child (Australian PhotoJournalist Magazine). Katrin is a photographer for Amnesty International Australia and is currently represented by Obscura Photos.