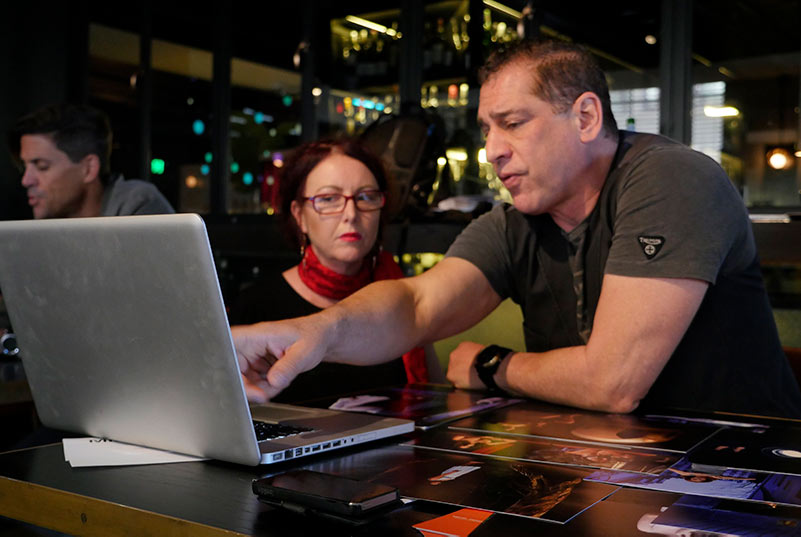 Portfolio reviews are a fantastic opportunity to get feedback and to network with industry leaders. Online reviews offer a unique chance to speak to international experts, without the necessary investment in both travel, time and money required to meet face to face.

This is your last chance to meet with these esteemed experts from the photography community around the world. Our reviewers will give you honest and constructive advice on your work and will also propose possible paths forward. Our goal is to ensure that you have access to quality industry feedback at an affordable rate.

“I really enjoyed my session with Sandy Edwards and I felt a great connection with her.  I did learn some really valuable things that I had not considered previously such as building an audience in the city you live in first.”

“Moshe was very kind and it was a very worthwhile experience. The session was very helpful, he gave me valuable feedback on my portfolio and also good feedback and guidance on producing images that are more likely to be successful in competitions”

“She (Nicky Catley) opened my eyes to a number of photographers that I should observe and look into further... for me the session was more than worth the money and the time.”

Natan Dvir is an Israeli photographer who focuses on the human aspects of political, social and cultural issues. He received his MFA in Photography from the School of Visual Arts (NY), after which he became an adjunct faculty member at the ICP. Based in Tel Aviv, he photographs around the world and is represented by Polaris Images agency and Anastasia Photo gallery. Natan’s main projects were exhibited in solo and group exhibitions in the United States, Europe, South America, Asia, and Australia. His work has been published by numerous international magazines and has received recognition winning prizes around the world.

Michael Itkoff has been deeply involved in the publishing industry in both print and digital media for well over 15 years. Michael has written for the NYTimes Lens blog, Art Asia Pacific, Nueva Luz, Conscientious and the Forward. Michael’s photographic and video work is in public and private collections in the United States and his work has appeared on the covers of Orion, Katalog, Next City and Philadelphia Weekly. Michael was the recipient of the Howard Chapnick Grant for the Advancement of Photojournalism, a Creative Artists Fellowship from the Pennsylvania Arts Council, and a Puffin Foundation Grant. Michael's monograph, ‘Street Portraits’, was published by Charta Editions in 2009.

Jennifer Greenburg is a contemporary artist who works with photographic imagery. She holds an MFA from The University of Chicago and a BFA from the School of the Art Institute. Solo shows of her work have been held at The Print Center, Philadelphia, and The Hyde Park Art Center, Chicago. Greenburg’s work has been part of numerous international group shows and is part of the permanent collections of many art museums. Jennifer Greenburg is currently an Associate Professor of Fine Art at Indiana University Northwest. Her area of concentration is in conceptual art and the articulation of ideas using lens-based media. Greenburg has been invited to speak about her work, her teaching, and to hold workshops with students around the globe.

Simon Harsent’s career has spanned more than 20 years and three continents. Born in England, his photographic career began in London after he finished studying photography at Watford College. In 1987 Harsent moved to Sydney, Australia where he soon established himself as one of the country’s leading commercial photographers working with the top advertisers in Australia and Asia. 1997 saw Harsent move to New York. However, his connection to Australia and Asia did not stop there. He frequently returns to Australia to shoot and is co-founder of POOL collective, a thriving photographers’ collective. Harsent was listed as one of the most influential people in advertising in Australian Creative’s 2011 Power 20 issue.

Irina Chmyreva is Co-founder and Artistic Director of PhotoVisa, Russia’s most significant international photography biennial outside Moscow. Irina has curated more than a hundred exhibitions worldwide and collaborated with several state and private museums in Moscow and other Russian cities, presenting both national and international contemporary artists. She has curated the Project in Support for Photography in Russia for the IRIS Foundation and was a part of the team behind FotoFest 2012 Biennial, Contemporary Russian Photography: 1950s-2012 in Houston, USA.

Nicky Catley graduated with a BA in History and Curatorship from the Australian National University in 1996 followed by a twenty-year career as an editorial photo editor. She is currently a photo editor at the Sydney Morning Herald and has been commissioning and editing news photography in Australia since 2011 following a decade in London as a staff picture editor and shoot producer on newspapers and magazines where the art and editorial photography sectors were closely entwined.

Oded Wagenstein is a seasoned photographer and educator, with his work published by National Geographic, BBC, The Guardian, VOGUE, and displayed in numerous exhibitions. He has more than a decade of experience in conducting hundreds of workshops and masterclasses across the world. In his approach to teaching and portfolio review, the emphasis is on crafting the ability to tell visual stories, evoke emotions, and finding personal voice and style.

Sandy Edwards is the founder of ARTHERE an organisation that provides services (consultation, mentoring, venue securing and exhibition production) to photographers to have exhibitions in Sydney and throughout Australia. She was Co-director and Curator at Stills Gallery, Sydney's most established and prestigious photo gallery from 1991 until 2017 when it closed. In this role and as an independent curator she has curated multiple photographic exhibitions in Sydney. She has been Curator and Judge of Australian Life (the successful public art photography competition/exhibition in Hyde Park), Art & About, the City Of Sydney since 2002. She has had an association with Head On Photo Festival, Australia’s premier photography festival.

Moshe Rosenzveig OAM is the founder and Creative Director of Head On Photo Festival. He has over 40 years’ experience in the media as a photographer, award-winning television producer/director (SBS TV) and curator. He has held lecturing positions at the University of Technology (UTS), the Australian Film, Television and Radio School (AFTRS) and others. He has also sat on judging panels for various competitions including The Walkleys, Tokyo Photography Prize, Sydney’s Art & About and is the lead judge for Head On Photo Awards.