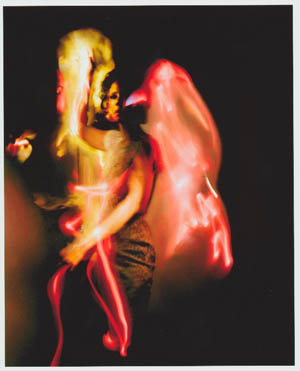 I didn’t take photography seriously until I went totally blind. I was trained in sculpture and industrial design. I planned to study architecture at Yale but then I started to lose my sight. There is currently no cure for Retinitis Pigmentosa.

It took me two years to recover and figure out what to do. My two fears were how to make money and how to protect myself. I earned an MBA and a black belt in martial arts. By the time I received my degree I was nearly blind.

One day I found my mother-in-law’s old camera. I found the camera fascinating and discovered it had an infrared setting. I thought a blind guy doing photos in a non-visible wavelength would be amusing. I knew nothing about film or manual cameras. My first photography outing after a thousand questions at the camera store started it all.

I bought my own computer and talking scanner. I taught myself how to use the adaptive software. The camera store had lent me an old medium format Mamiya flex. I handled it so much the finish began to show wear.

I am only a tourist in the sighted world.

I view my work during the event of taking the shot in my minds eye. I “see” each shot clearly; only I use sound, touch, and memory. I am more of a conceptual artist than a photographer. I am not bound by the assumptions of the sighted or their assumed limits. My drawings look like my photos (at least the ones I made when I was sighted).

I am trying to cut a new path as a blind visual artist. Sighted people don’t help me make the art. They do give me feedback before I do the final large prints. I shoot the image, develop the film, and I do the contact print. I do what I call sample prints. There is a clear dividing line. I need the feedback loop to afford making large final products. I could cut sighted people completely out of my process. I want sighted people involved. It is a good bridge between the blind and sighted. I want to be included in the world and accepted.

What I get out of taking photos is the event not the picture. I do the large prints to get sighted people thinking. Talking with people in galleries builds a bridge between my mind’s eye and their vision of my work. Occasionally people refuse to believe I am blind. I am a visual person. I just can’t see.

Women talk about a glass ceiling. Blind folks face a glass front door. We can look into the workplace but aren’t allowed to enter. I do something else. I slip photos under the door from the world of the blind to be viewed in the light of the sighted.

BC is an image of a woman "dancing" with light as a partner. There is a bit of a sinister element. There is a face looking back at her. I did a group of photos of young women. A dancer about my age asked how I would portray her. She had lost one breast to cancer. I chose to depict her this way.

Red Wing has a little of the spiritual thing I fall into at times. For some reason winged women are popping up in my work. I was surprised to find Victoria Secret has be-winged their models for some time. I'd love to do a shoot for them.

This one is pretty straightforward. It has a religious theme.

Since I was doing to many religious things one way I changed tact. This one has more of a shamanistic animal reference. I like images that empower not demean or complain.

I think of as a book cover. I like images that conger up a whole hidden story. I let the viewer make up the text.
www.peteeckert.com