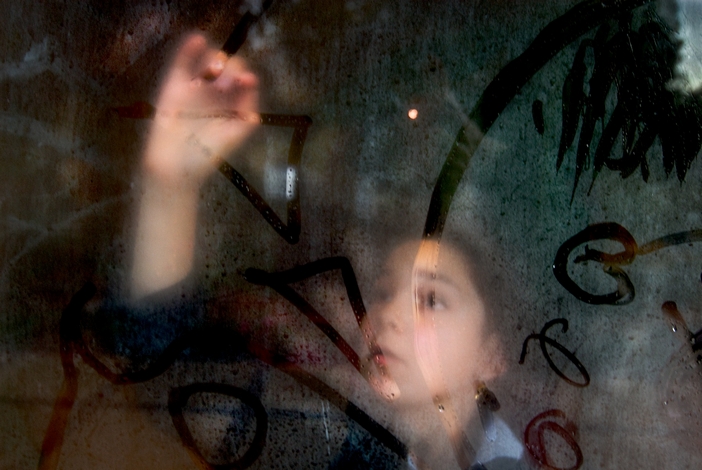 Sam Harris abandoned a successful career in London as a photographer for Esquire and the Sunday Times to see more of his family. The acclaimed series that resulted was described by Magnum’s David Alan Harvey as being “incisive, close to the heart work done with a special eye”. “Photography,” he says, “does not get any better than this.”

The urge to be more than a part time father to his daughter Uma was the initial catalyst for Sam Harris to contemplate a total lifestyle change. A photo shoot with Victoria Beckham was the final straw.

“There was a whole machine around her and I was just another cog,” he said.

“There was no intimacy, no personal connection. I thought, ‘Why am I doing this?’”

What he sensed should have been a highlight in his career instead left him flat and depressed.

“It hit me like a ton of bricks,” he recalls. “I realised I was wasting my time.”

As a youth in the early ’80s, Harris was influenced by graphic novelists like Bill Sienkiewicz, album cover art and Marc Chagall. He experimented obsessively in his home darkroom and doggedly pitched the results to record companies and design houses.

When one eventually bit it was Michael Nash and Associates - a leading design agency that admired his innovation and matched him with emerging musicians.

It was the start of an ambitious career that would lead to Harris working with artists like Beth Orton, Jamiroquai, Black Grape, Elliot Smith, Badly Drawn Boy, Mazzy Star and Blur.

But in the ‘90s the music industry was changing - and so was he.

"Record companies like Sony and EMI were buying up the small and medium sized labels,” said Harris.

“Everything was becoming corporate. I used to go to meetings and every record label would have a unique personality and address down a side street. Now, they were starting to get bunched up in big glass towers where each floor looked the same. A lot of the creative mavericks of the music industry were leaving and being replaced by company people."

Now a father, Harris experienced a growing sense that even the most unique and interesting assignments were tainted by the fact that his family were not sharing them.

"Uma was starting Kindergarten and the kindergarten workers were spending more time with my daughter than I was,” he said.

“It didn't feel right to me. I was questioning what I was doing with both my photography and my life more and more. I was getting fed up with the commercial nature of the music business. I wasn't inspired."

After the Beckham shoot he began serious conversations with his wife about how their family could live in a more fulfilling way.

"I decided to abandon my career in London,” said Harris.

“I wanted to rethink everything, to spend quality time with my family and to change the way I was working and thinking as a photographer.”

Years of commercial work had left him with habits he now wanted to let go. He put down his professional equipment in favour or an early digital point-and-shoot and started using it to document his family's unconventional lifestyle as they welcomed a second daughter in India and travelled extensively, ending up in Western Australia.

The family settled in Balingup among a diverse neighbourhood of artists, farmers and those chasing an alternative lifestyle. Harris’ studies and his new migrant status limited the work he could do photographically making his family the only subject he could regularly access.

Away from commercial work Harris at times felt he was losing contact with himself as a photographer, though online communities like David Alan Harvey's Burn magazine were a vital support.

"Once David wrote that people are always saying that they think they need to travel to the other side of the world to do a photo shoot but sometimes it's in front of your nose, in your own backyard,” said Harris.

“That was exactly what I was doing. It fired me up and helped me feel less isolated in the bush."

Though accessible, Harris believes it is harder to shoot at home than on location.

It can be difficult, he said, to know where to draw the line between the dual role of photographer and father. At times Harris succeeds in both, like when, after Yali had fallen from her bike, he used a fraction of a second to make a frame on his way down to assist.

At others, like when she came to him with her dead rabbit in her arms, Harris chose to leave his camera aside. He still remembers the potential of the image, the wet-faced girl, autumnal sky, outstretched arms and limp creature, but he also believes the 20 seconds it would have taken to locate his camera would leave a lasting impression on his daughter about his priorities.

He describes the premise of his series as basic, simple stuff - life, family values, children, love - fleshed out with domestic details that have brought him joy.

"It might be Saturday afternoon when you're sitting down and the sun streams in at an amazing angle and starts dancing on the wall,” he said.

“You try to capture that moment because a second later it will be gone."

Brevity is a reality he is keenly aware of with his children too.

“I'm going to keep photographing the girls until they eventually leave the family nest. And that's when it will reach its natural conclusion. I feel like it is just the beginning really. Hopefully the best is yet to come."

Postcards from Home will be exhibited as part of the Head On photo festival at Global Gallery, Paddington May 6-15.

Sam Harris will give two talks at the Head On Seminar – Day 1, May 14. ‘Transition – From London to the Bush’ and ‘Rock N Roll Photography’, alongside Tony Mott, Sophie Howarth & Tali Udovitch.