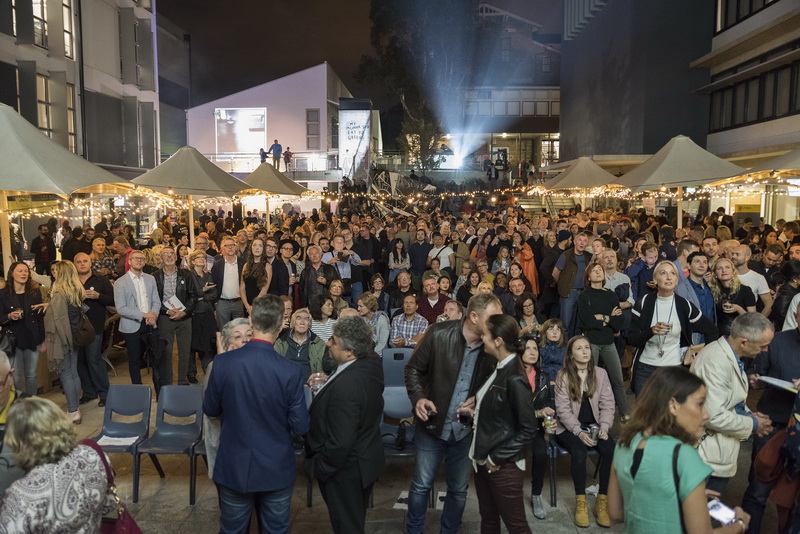 Bigger, better, bolder - we put photography overhead, underground and on the ground and as far as the eye could see! Head On Photo Festival brought you photography in so many different forms for 2017.

From Paddington to Pitt St and all the way to Parramatta, Head On popped up everywhere bringing you photography from across the globe.

Sydney’s CBD was transformed into a photographic wonderland with public installations at Circular Quay, Pitt St, Queen Victoria Building and The Rocks and major exhibitions at the Museum of Sydney, NSW Parliament House and the Festival Hub at Sydney Lower Town Hall.

Here’s some of our best bits & party pics to recap Head On Photo Festival 2017!

The Hon. Don Harwin, Minister for Resources, Minister for Energy and Utilities, and Minister for the Arts, Vice-President of the Executive Council awarding the Parliamentary prizes as part of the Head On Landscape Prize. Image: Michael Amendolia

Olympus Photo Walk crew groups together for a shot before setting off with Lauren Bath. Image supplied by Ante Badzim / Olympus. Event supported by Olympus.

Portraits on George, another public art installation brings a superb selection of the Head On Portrait Prize into the public domain. Image: Moshe Rosenzveig

Festivalgoers enjoying exhibitions at Festival Hub Sydney. Special thanks goes to our Major Printing Partners, Print2Metal & Chromaluxe for the beautiful metal prints. Thanks also goes to our Government Partner, City of Sydney for use of Lower Town Hall. Image: Moshe Rosenzveig.

Paddington Reservoir Gardens is a crowd favourite! Special thanks to Arthead for their beautiful printing. Image: Stephen Godfrey

If you still want a dose of photography fun, take a look HERE to find out what's still open. If you want a memento of Head On Photo Festival 2017 our t-shirts & books are available in the store

Help us turn your feedback into funding. If you enjoyed your Head On Photo Festival 2017 experience, help us spread the word and create better funding opportunities with a brief survey