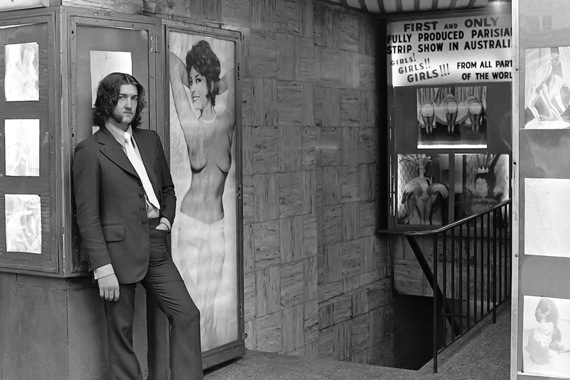 This morning I awoke to the marvellous photographs of Leon Gregory on Head On’s Facebook page, and was completely absorbed. Here was the Sydney I knew from the late 60s early 70s. Here my psyche scraped up memory from my teenage soul. I knew Victoria St where the indomitable Leon Gregory roamed with his camera. My memory recognized something intrinsically Australian, and without an Aussie flag in sight.

This morning I had met his pictures, this evening I spoke to the man. Ebullient, modest and good natured, Gregory (at 72 years young) explains he does everything by necessity. His early career was established as a working actor: radio, stage and television such as “Division 4”,“Homicide”, and “Skippy”.

“Goodies or baddies?” I ask.

“Why, baddies of course!”

What he made in between time took him in and around the Cross of course, and as far afield as Glebe and Balmain.  And who inspired him? HCB, Weston, Dorothea Lange and among others.

Eventually Leon moved to Kangaroo Valley where he worked on the roads, mowed lawns and forsook his photography “career” eventually becoming a jazz musician and teacher of music.

A few years ago his photographs were re-discovered in a mouldy cupboard, whereupon he began the agonising job of scanning his old negatives and rediscovering an inner Sydney era now long gone. He taught himself digital photography and searched out various galleries, institutions and indeed our own Head On Festival.  We were quick to realise the beauty of his images, the glory of our own backyard, and the emotional and visual intelligence of someone who not only saw, but documented, our home town. What a bloke. A must see.  Thanks Leon.

For more info about Leon's Featured Head On Exhibition, click At Last the seventies