In the shadow of The King | Head On Photo Festival

In the shadow of The King 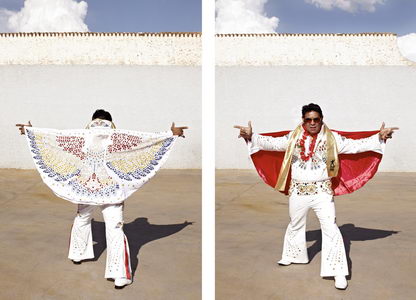 IN THE SHADOW OF THE KING (photographed at Elvis Festival, Pakes 2012)

I met Lenny at this year's Elvis Festival in Parkes, NSW.  He lives with his family in country NSW and performs as an aboriginal Elvis tribute artist.

I was photographing Elvis fans and after shooting an Indian Elvis version a guy tapped me on the shoulder. He said: "If you want to photograph a different Elvis, I have someone for you."

Lenny's brother, his 8 year old red head and white skin foster child and me waited on a bench in the park while Lenny got changed into his Elvis outfit in the public toilets.

Lenny is quite shy and a little disappointed, as he couldn't get a gig on stage at this year's festival. He explains to me that he calls himself "In the shadow of The King" because of his skin color.

Lenny posed proud in his bright white Las Vegas suit and rewarded me with his golden sache for taking time to photograph him. I hope to see him on stage next year, Parkes?