Mick, my face... my tattoo`s | Head On Photo Festival 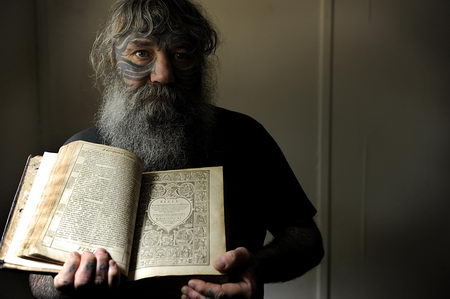 Mick Sharpen`s life has been a tragedy from the beginning, this man was obsessed with tattoos, it started in primary school and continued thru most of his life. He took the life of another person and in prison his tattoos continued, in 1981 his mate asked him when he was going to do his face. Mick demanded his mate tattoo his face then and there.

Originally Mick was very reluctant to be photographed but eventually he thought some good might come of this published image of his face. Now he has found some peace with God and has helped some local `at risk` kids he wanted people in the community to see him for good and bad, this picture was his way of doing that.

I approached this assignment with cautious excitement, it was always possible Mick would refuse to be photographed at the last minute. We talked about life and drank his herbal tea for over an hour before I again respectfully asked him could I start taking his photograph. I only used available light and this suited the low- key approach to this assignment and we continued to talk as I quietly took his image. I could sense he was very unsure about this but within a few minutes he relaxed more and I believe at the end of the brief shoot he had enjoyed the experience.

This image was a result of a total package, connection with the subject, non judgemental respect, calm reassurance, sharing a conversation and cuppa and in the end a brief photographic exchange.