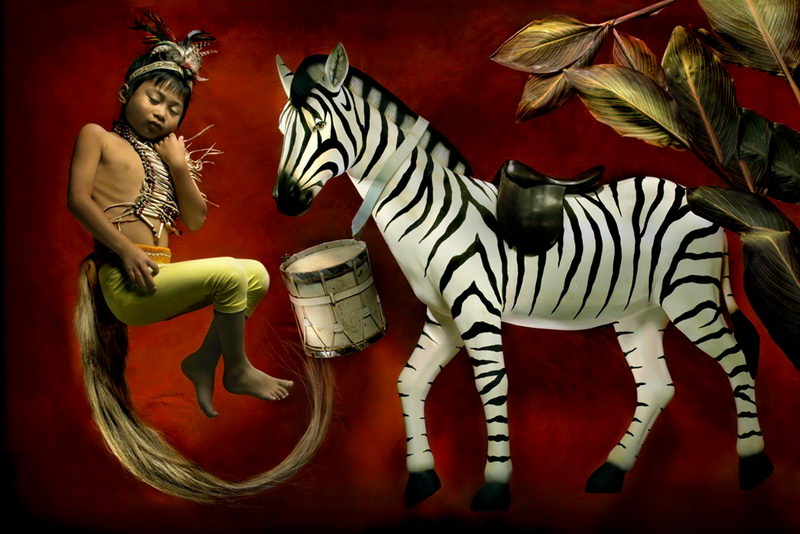 Sawat from the series Sang Tong, translates as 'the golden shell' and comes from a beautiful old Thai folk tale about a boy who emerges triumphant and 'golden' from disquieting circumstances beyond his control. The series features portraits of young children who are all adoptees from Thailand and now living in Melbourne. It is appropriate this series should be titled Sang Tong‚' the Boy with the Golden Shell'. Derived from an old Thai folk tale, Sang Tong was born into royalty but abandoned and later adopted by a giantess, who disguised herself so that the boy would not feel like an outsider. The ploy worked until he was 10 years old, when he found out that he was adopted and set out to explore the world. Wondering through the giantess' palace, Sang Tong discovered a range of magical objects, includes a pair of shoes that enabled him to fly. Sang Tong found a well of silver and gold. After lowering himself into it, he emerged with a beautiful golden body, however he also found a magical mask which disguised him as an ugly person. He later encountered a princess, who saw past the mask to fall in love with the beautiful man within. 'Suspension' is the dominant word that comes to mind when I think of my working method for this series. The magical world was in the centre where each child lay on a high, glass structure. Above them floating objects were suspended, and below painted canvases and props.