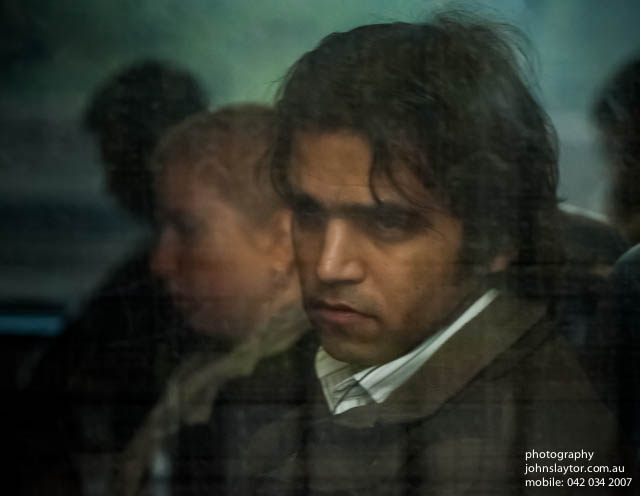 John Slaytor's first exhibition, Lost in Transit, was part of the Head On Photo Festival at Global Gallery in early May. He shares thoughts about what he did right and what he wished he had of known.

Whatever you do, have an artist’s statement. Don’t think that your work should speak for itself. An statement will anchor your work and thus accelerate the viewer’s understanding of your work. Why am I convinced artist statements are important? Because of the five photographers exhibiting their work (each in a separate room) at Global Gallery, only two had artist’s statements and viewers at the opening night were constantly telling me how unapproachable were the works in other rooms without artist statements.

In 2009 I saw Shoah, Claude Lanzmann’s sobering film about the Holocaust in which he documented how trains were used to transport Jews throughout Europe to concentration camps. In Shoah, Lanzmann also interviewed eyewitnesses to the transports who knew their ultimate destination yet were powerless to alter the trains’ course.

Further, when I read a speech by the author David Foster Wallace which talked about how real freedom is the opposite of “unconsciousness, the default-setting, the 'rat race' — the constant gnawing sense of having had and lost some infinite thing”, I decided to document the 'rat race' travelling by train to work in Sydney and their loss of existential freedom.

These portraits, which are not confined to any one ethnic, gender, social or age group show the universality of our society’s resignation to its loss of freedom. I hope that my images will do their small part in making our society accept that despair is not confined to a few individuals but is endemic and through this acceptance, our society’s values will change.

Special thanks to Jonathan Page and Peter Travis AM for embracing my work.

Because I am exhibiting my work as part of a photography festival and because my work is technically unusual, it made sense to explain technical aspects to viewers. Originally I included this information on the artist’s statement but Joe McGuiness, Global Gallery’s owner, said this would muddy the waters so I stripped out the technical information and placed it on a separate sheet at the other end of the room. Again, the statement isn’t long (163 words) it’s legible (I used 36 font size, 1.2 linespace) and large (43 cm by 50cm) – I made the technical statement smaller than the artist’s statement to signal to viewers which one they should read first:

This project capitalises on technological advances in digital imaging since, in my view, everything under the sun has been photographed using conventional technology so when new technology is available, there is the possibility of capturing hitherto unseen worlds.

My camera is capable of shooting at 12,000 ISO and this is extraordinary. To capture an unseen world, I decided to photograph during the day something that couldn’t be seen without this very high ISO.

The poor train interior lighting and the speed of the trains, travelling up to 40km/h, meant that I had to shoot at 1/3000th sec., at f3.3 and at 12,000 ISO. The incredibly high ISO made the images more like paintings than photos. Photographing through train windows which were dirty, graffitied or scratched also contributed to the painterly feel.

I could have used any photographic imperfection to reject an image. Instead, maybe thinking of Saul Leiter’s Early Color, I chose images on their impression.

To an extent exhibiting prints is smoke and mirrors, after all, you are trying to persuade the viewer to spend hundreds of dollars on a piece of paper that might be worth a fraction of that amount. A frame disguises the fact that your print is a simple piece of paper. Frame your works, all of them. I couldn’t afford large frames so I printed 17 images smaller and framed them myself (with 50cm x 50cm or 50cm x 70cm frames). This kept the cost down but didn’t sacrifice their visual impact. I then splurged on two large frames to give the viewers a glimpse of what the images looked like when big (1.3m by 1.2m).

Another lesson taught by Joe McGuiness is that if you cram too many images onto a wall, you look desperate and that is a turnoff to buyers. Better to hang fewer images to signal you are confident. I listened to Joe and removed an image.

I budgeted $200 for 500 double sided DL flyers (10cm x 30cm) but to maximise their effect, I printed information on both sides. Below is the flyer (which I designed in Indesign to keep costs down). Some of my fellow exhibitors only produced single-sided flyers and that seems crazy as it means half the amount to take home for viewers (who want to come away with something).

Have a visitor’s book. It lets people feel they have a voice and who knows, their suggestions might be invaluable.

Lesson 7 – Drop into the gallery

I happened to be passing yesterday so I dropped into the gallery to find out how it was going. Two serious photography collectors were there who were genuinely interested in my work. I had never met serious photography collectors before so I spoke with them to find what their expectations were and have since learnt it is essential to limit prints to a maximum of 5-7 to make them attractive to collectors. Perhaps I should have pretended to be all-knowing in the hope the collectors would be swayed by my sophistication (maybe I should have worn a beret) but meeting actual photography collectors was too valuable to pass up an opportunity to learn and besides, one of the things that I learnt was that they understood my work and this has given me tremendous confidence. This chance encounter wouldn’t have happened if I hadn’t dropped into the gallery.

Lesson 8- Get maximum bang for your buck

If you are paying a gallery to exhibit your work like I was, do whatever you can to optimise your return on a daily basis. Global Gallery had a sign post on Oxford Street. I suggested that the gallery attach a sign to their signpost but it seemed too hard for them. So I printed out a doubled sided A4 Head On logo and attached it to the signpost. I did this to cash in on the Head On logo and thereby attract visitors to the gallery. Why? Because the exhibition was costing me a $100 a day in rental and it was silly not to go the extra mile.

Lesson 9 – Believe in yourself

My work is of despairing anonymous individuals. Yet a friend burst into tears on the opening night because she was so moved by them. After five days in the gallery, I have sold five works. I had to believe in my work in order to exhibit them and from the response to date, I am so glad that I did.