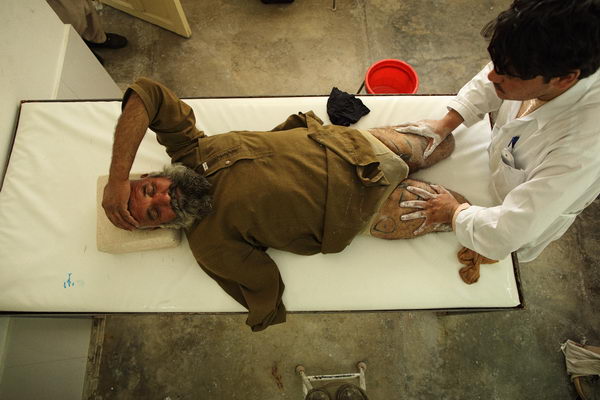 Based in Kabul, Afghanistan, Andrew Quilty tell us about the important work of RISC and the best lessons he's learned in photography.

Kurds occupied various tracts of open land close to the Turkish/Syrian border today, both to watch the ongoing clashes between ISIS militants and Kurdish YPG fighters and to protest Turkey's lack of response to the plight of the Kurdish residents of Kobani, across the border in Syria. Estimates of 200,000 people have fled Kobani and its surrounding villages in the past two to three weeks as ISIS advanced. Yesterday it appeared that ISIS was rampaging into the city and that Kobani might fall any day. This afternoon, however, U.S.- led coalition airstrikes struck ISIS positions repetedly and may have stemmed their momentum. On several occasions today, the Kurdish civilians - some watching, some protesting - were dispersed by heavy-handed Turkish forces who used tear gas and water canons. 7 October, 2014.

Reporters Instructed in Saving Colleagues. It was founded by journalist and film makers, Sebastian Junger, who lost his friend and colleague, Tim Hetherington, in Libya in 2012. Hetherington died as a result of a shrapnel wound that, had he been with someone trained to treat it, could well have survived. When Junger heard the news he decided to hang up his war reporting boots and focus his attention on providing training to freelance reporters and photographers in an effort to prevent deaths such as Hetherington's from happening again.

The resulting RISC courses are offered free to freelancers working in conflict zones and are held roughly twice per year in places such as New York, Nairobi and even Kosovo.

The RISC course I recently completed exceeded my expectations. The practical knowledge and skills learnt, I feel, are invaluable assets, not only as a photographer working in a conflict zone but for life in general. I feel as though I would now be at least adequately confident in approaching a situation involving physical trauma, where previously, I'd have been useless. Confidence was probably the major takeaway from RISC, for me.

RISC runs entirely off donations. Because freelancers don't have organisations behind them to fund such training, the courses are 100% subsidised - including basic accommodation in the host city. It costs approximately $US1,000 to put one freelancer through the intensive, 1 week course, so even small donations can mean the difference between another freelancer being trained in field first aid.

Shopkeepers sit at the entrances to their stores after their doors and windows were blown in by a truck bomb that also killed 15 and injured hundreds of civilians in the early hours of the morning in eastern Kabul. The attack would be the first of three in the 24 hours that followed. August 7, 2015.

4.)    What is the best lesson you learned on assignment?

Planning. The best ways to mitigate risk in a place like Afghanistan (where I spend most of my time) is to know the place you're in, have reliable local contacts, people that know where you are, up to date security information and limiting yourself to get what you need, even if it's not quite want you want. Limiting your time and exposure in any given place is perhaps the most essential lesson though. It differs depending where you are and who you're with but generally, half an hour in any area you're unfamiliar with is advisable - this means that if there's anyone that wants to arrange anything to compromise your security (eg. kidnap you) they'd better do it quickly.

A triple amputee lies on a hospital bed while being fitted for prosthetic legs at the International Commitee for the Red Cross (ICRC) Orthopaedic Centre in Lashkar Gah, the capital of Helmand province in southern Afghanistan. The centre caters for all war wounded, regardless of what side of the war they have fought on (if they fought at all). The centre's employees are made up of 95% disabled people who have been patients at the centre themselves in the past.

5.)    What is the best lesson you learned in photography? (It could be some advice someone once gave you, a quote or something you learned on a specific job?)

In terms of photography, there's a saying in Afghanistan that is something I always keep in mind when working in difficult circumstances. It translates roughly to: if the front door is closed there's always a back door that's open. Access is one of the fundamental elements that photographers rely on - if you can't get somewhere, you can't photograph it. In developing countries, like Afghanistan, if you're patient and determined, there's almost always a way in, and the same applies, in principal at least, in developed countries, like Australia.

Andrew's work can be found on Instagram and his website. For more details on RISC, or to donate, please go here: http://risctraining.org/