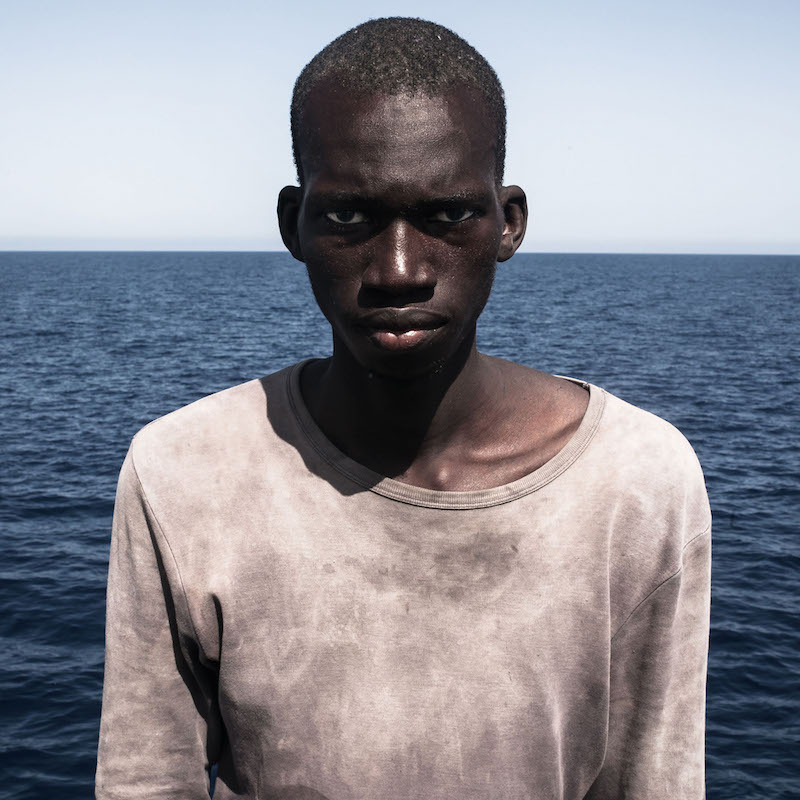 The photo award winners of Australia’s most prestigious photography prize were announced in front of thousands of guests at the official opening of the Head On Photo Festival at UNSW Art & Design Paddington on Saturday 5 May 2017.

More than 5,000 entrants vied for over $50,000 worth of prizes across the five categories: Portrait, Landscape Mobile and Student.

Crowd favourite category, the Head On Portrait Prize, was taken out by Cesar Dezfuli with his emotive portrait of a young West African refugee rescued 20 nautical miles off the Libyan coast. The 16 year-old had travelled in a rubber boat that had carried 118 people on board. First prize in the Landscape category went to Todd Kennedy for an image of a rock formation at Lake Mungo. Although it looks as though it’s been taken in black and white, it’s actually shot in colour.

Winner in the Mobile division was Demetris Koilalous for his haunting shot of the sea passage between Greece and Turkey that is referred to by migrants and refugees as the ‘death passage’. The image was shot during a tempest that caused a temporary halt in the arrival of dinghies from the Turkish coast. The Student prize was awarded to Sophie Smith whose use of a slow shutter produced an image filled with energy and liveliness.

Running from Thursday 5 – Sunday 28 May 2017, Head On Photo Festival is one of the world’s largest and most prestigious photo festivals. Since it began in 2010 the Festival has evolved from 70 events to 180 throughout its program. This year, over 60 featured exhibitions have been nominated as highlights of the Festival.

Please visit the Museum of Sydney to see all finalists of the Portrait, Mobile and Student categories and the NSW Parliament House to see the Landscape category finalists.

“Mediterranean Sea, 1 August 2016. Amadou Sumaila (16), from Mali, poses for a portrait after being rescued on the Mediterranean Sea, 20 nautical miles off the Libyan coast by a rescue vessel provided by the NGO Jugend Rettet. The rubber boat in which he travelled carried 118 people on board, who were transferred by the Italian Coast Guard to Lampedusa.”

“Blind girl playing in a dumpsite near an impromptu refugee campsite in Eidomeni, Greece.”

“Prolific Instagrammer Lara Verheijden holds her presence with conviction; she is herself and is neither shaped by society nor exhibits for the sake of showing off. She is so comfortable in her skin it is almost as if she grew up in a cave without the media and opinions to shape her identity. Yet, at the same time, she is empathic and aware, an unusual combination in someone so young. I didn’t choose to photograph Lara because of her harelip, but because I of her spirit and rawness as well as her confidence and infectious humour.”

“This image of a rock formation at Lake Mungo is actually a colour image and not a B&W conversion. This is the natural colour of the rocks when lit by pure white LED's from a drone. Some green can be made out on the small bushes to the right.”

“Broken glass from bottles are piled up for recycling at the Phoenicia Glass Works Ltd. factory in the southern Israeli town of Yeruham.”

“Descendants of mares and stallions brought to Australia by British settlers over 200 years ago, wild brumbies have survived the dry outback, snow-covered mountains and thick bushland regions.  Australia is thought to have the largest population of wild horses in the world, however, the future of the brumby in the Snowy Mountains in New South Wales is uncertain. In order to protect fragile alpine and sub-alpine environments, the state government is implementing a 'wild horse management plan' that aims to cull 90% of the brumbies over the next 20 years. An emotive and complex issue that divides the community.”

“As an artist in residence in December 2016 at a hotel on Cabarita Beach on New South Wales’s far north coast. I was struck by the region's raw beauty and moved by the spirituality of Mount Warning as an ancient epicentre of indigenous life. Here Mount Warning is depicted in a local mural near Murwillumbah.”

2017 saw the addition of two new prizes supported by Parliament NSW, the President’s Prize and the Speaker’s Prize.

"Landscape can offer more than sense of space …. it can also present the context in which our lives are lived. “The Calling” is certainly interested in landscape as context but it is also an invitation to imagination and participation. How are stories created? Is this story fragment a beginning or an end? Can the viewer play a role in story? These questions are intentionally left unanswered and in so doing the work asks the viewer to think into their own imaginary worlds."

"This image is part of an ongoing series concerning the Snowy Hydro Scheme - the structures, landscapes, towns, recreations etc. By far the most adventurous and significant piece of infrastructure, and an engineering wonder of the world, the Snowy Hydro Scheme not only shaped a region, it shaped a nation with thousands of immigrant workers arriving in Australia to help with the construction.

The system diverts precious water from the Snowy, Eucumbene and Murrumbidgee Rivers westward through the Great Dividing Range for use in irrigation. The Scheme is also used as a source of hydro electric power. During it's creation process a number of reservoirs used for storing water & recreational use were created.

Here, on Lake Jindabyne, a boat hire pontoon sits marooned off the banks after heavy rains in September and October 2016. The blue, evening light marries well with the still air and is further accentuated by the tones of the medium format film."

“The sea passage between Greece and Turkey - usually referred to by migrants and refugees as the 'death passage'- during a tempest that caused a temporary halt in the arrival of dinghies from the Turkish coast.”

“A late night trip to the Emergency Room after a nasty fall at a school fete. This was taken at 2am after seeing multiple nurses and a doctor. Nothing serious, just a hip that was bruised and sore.”

“Life in a hospital is easy during the day: you wait for the next IV to finish, for the next result to be delivered, for the next visitor to pop in. But the night always comes and with it, silence. The lights dim down, everyone is quiet and you can hear your own breath. You can hear your own fears. At night, my father told me he would close his eyes, quiet his mind, shut his pain away and imagine he was sleeping at home, on a lazy Sunday morning.”

“In ‘Animated’, I asked my best friend to play some music and dance to her heart’s content. The slow shutter speed caused her sequinned top to resemble sparks flying around her, representing energy and liveliness.”

“Recorded levels of anxiety related disorders in 18 - 34 year olds is at its highest ever. We need to ask - are we really the most mentally ill generation? Or have medical advancements and psychological research enabled an increase in diagnosis? An extensive range of issues such as stress over education, money, careers and social issues that all affect mental health. However Millennials are also slightly obsessed with labels and self-diagnosing their less favourable personality traits which could also affect the way mental illnesses are perceived in society. This image depicts the raw emotion of a panic attack in an attempt to help suffers feel more comfortable talking about it after seeing it in a public setting.”